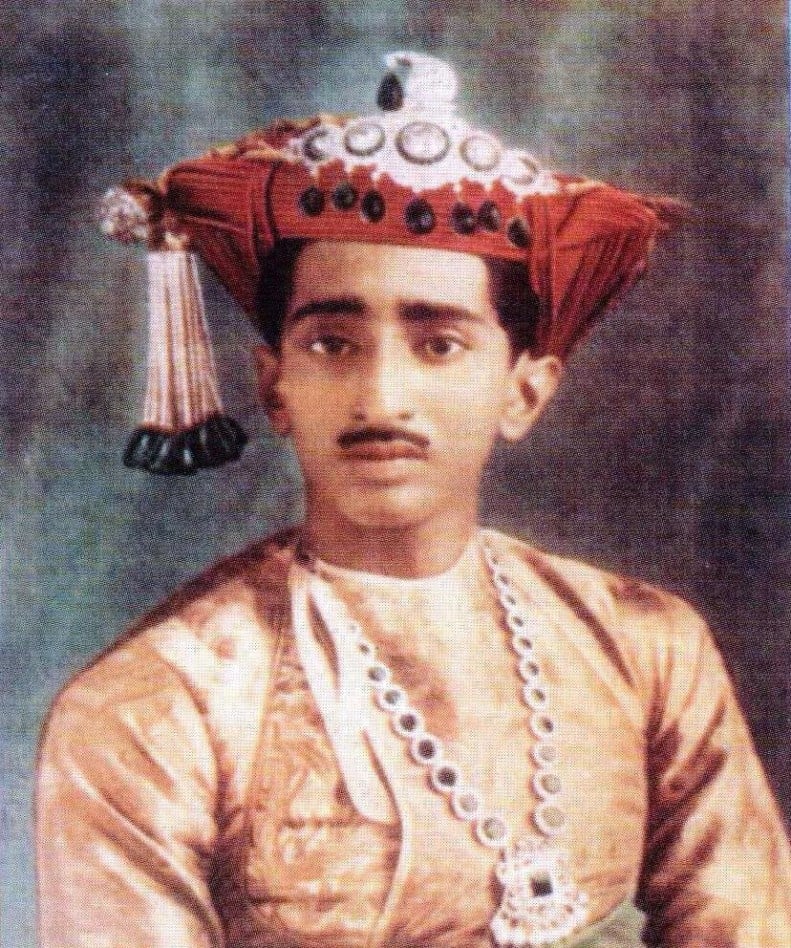 It is said that during this time, he could plunge his arm up to his elbow into several chests full of precious jewels. His treasure chests had an estimated value of $20 million in 1937. Today, taking inflation into account, that is equal to $344,902,857.14 down to the penny. Yowza! I think it’s safe to say that he was ballin’. As the story goes, he chose to build his 18th home in Santa Ana because he wanted a safe place to raise his daughter, 5-year-old, Princess Usha. They loved the beauty and tranquility offered by Santa Ana. The home is located at the corner of Heliotrope and Santa Clara at 2221 North Heliotrope Drive and was built by the then most prominent building contractor in Orange County, Allison Horner. At the time, Allison Horner lived across the street and he then hired Donald Kirby of Balboa Island to design the house.

The Santa Ana Register stated, “A man’s home is his castle, and the castle being built for the world richest man, the Maharajah of Indore, in Santa Ana is not only a castle; it is literally a fortress. It will guard that which is more dear to him than all of his income-it will guard the safety and continued well-being of his daughter, Princess Usha.” According to this publication, this is the only castle in Western America to house a foreign ruler and his family.

At the time, the cost to build was only $50,000, however, over $150,000 was spent to furnish the entire home with the most exotic rugs and finishes. Every night, a servant slept in the hallway directly outside Princess Usha’s bedroom.

When the home was fully built, the Prince and his family moved in. His small circle of friends included his builder, Allison Horner, and attorney Dave Howell. Only after 1 year of living there, the family decided to move back to India to be of service to his emperor and his country. Princess Usha stayed in the Heliotrope house and attended Hoover Elementary.

What's your home worth?
What's my payment?

Epilepsy Safe Mode
Dampens color and removes blinks
This mode enables people with epilepsy to use the website safely by eliminating the risk of seizures that result from flashing or blinking animations and risky color combinations.
Visually Impaired Mode
Improves website's visuals
This mode adjusts the website for the convenience of users with visual impairments such as Degrading Eyesight, Tunnel Vision, Cataract, Glaucoma, and others.
Cognitive Disability Mode
Helps to focus on specific content
This mode provides different assistive options to help users with cognitive impairments such as Dyslexia, Autism, CVA, and others, to focus on the essential elements of the website more easily.
ADHD Friendly Mode
Reduces distractions and improve focus
This mode helps users with ADHD and Neurodevelopmental disorders to read, browse, and focus on the main website elements more easily while significantly reducing distractions.
Blindness Mode
Allows using the site with your screen-reader
This mode configures the website to be compatible with screen-readers such as JAWS, NVDA, VoiceOver, and TalkBack. A screen-reader is software for blind users that is installed on a computer and smartphone, and websites must be compatible with it.

We firmly believe that the internet should be available and accessible to anyone, and are committed to providing a website that is accessible to the widest possible audience, regardless of circumstance and ability. To fulfill this, we aim to adhere as strictly as possible to the World Wide Web Consortium’s (W3C) Web Content Accessibility Guidelines 2.1 (WCAG 2.1) at the AA level. These guidelines explain how to make web content accessible to people with a wide array of disabilities. Complying with those guidelines helps us ensure that the website is accessible to all people: blind people, people with motor impairments, visual impairment, cognitive disabilities, and more. This website utilizes various technologies that are meant to make it as accessible as possible at all times. We utilize an accessibility interface that allows persons with specific disabilities to adjust the website’s UI (user interface) and design it to their personal needs. Additionally, the website utilizes an AI-based application that runs in the background and optimizes its accessibility level constantly. This application remediates the website’s HTML, adapts Its functionality and behavior for screen-readers used by the blind users, and for keyboard functions used by individuals with motor impairments. If you’ve found a malfunction or have ideas for improvement, we’ll be happy to hear from you. You can reach out to the website’s operators by using the following email

Our website implements the ARIA attributes (Accessible Rich Internet Applications) technique, alongside various different behavioral changes, to ensure blind users visiting with screen-readers are able to read, comprehend, and enjoy the website’s functions. As soon as a user with a screen-reader enters your site, they immediately receive a prompt to enter the Screen-Reader Profile so they can browse and operate your site effectively. Here’s how our website covers some of the most important screen-reader requirements, alongside console screenshots of code examples:

We aim to support the widest array of browsers and assistive technologies as possible, so our users can choose the best fitting tools for them, with as few limitations as possible. Therefore, we have worked very hard to be able to support all major systems that comprise over 95% of the user market share including Google Chrome, Mozilla Firefox, Apple Safari, Opera and Microsoft Edge, JAWS and NVDA (screen readers), both for Windows and for MAC users.

Despite our very best efforts to allow anybody to adjust the website to their needs, there may still be pages or sections that are not fully accessible, are in the process of becoming accessible, or are lacking an adequate technological solution to make them accessible. Still, we are continually improving our accessibility, adding, updating and improving its options and features, and developing and adopting new technologies. All this is meant to reach the optimal level of accessibility, following technological advancements. For any assistance, please reach out to